Over the last five years or so, and more pointedly since Denise and I have taken a long needed break during these last few years, I have been wondering if the time of my public type of ministry is over. I have wondered if I have completed the purpose that the Lord had given me so many years ago when He spoke to me very clearly that my pathway in Christ was towards becoming an anointed preacher.

From that early point on I was fascinated by the ministering presence of God in preaching and feel now that He has been teaching me over the years since then the many secrets of speaking with and in the anointing. I started to try to preach of course but my Christian walk at that time was about God’s preparing me as a person to become a preacher. It wasn’t for many years that my development as a preacher and beginnings of anointed speech reached a stage where I could be useful to Him so that He began to give me the message He wanted me to bring to the world and the church.

In 1979 I received a great healing through an experience of the Father’s love for me and a revelation that would become the ministry spoken to me about in those earlier years: The message of sonship. Since 1980 where ever I have been asked to speak or minister I have spoken on these things with the heart and words God has given to me. The level of anointing has slowly risen during all of these years and the work that God has done through this anointing has spread beyond my wildest imaginings. It has so caught alight around the world and so many other preachers have taken it up; including all of those who now make up Fatherheart Ministries now, that I have realised that this will continue to spread and grow without me. There is now no need for me to carry on the crazy pace of travel and speaking I have been doing over the years.

So over the last few years especially the question I have had predominantly in my mind has been, HAVE I FINISHED THE WORK GOD GAVE ME TO DO those long 47 years ago? Many preachers and prophets faded from public history when they had completed their purpose and their deaths were unrecorded happening years later and maybe I am to be one of them.

Well almost all of my friends have said no, we need you and want you to continue ministering. But in my heart of hearts the question has still been there.

About 8 months ago I was fly fishing at a mouth of a small river running into Lake Taupo near to where we live. It was a rainy day with the sun breaking through at times. Just before the sun set across the lake it burst through the clouds from just above the horizon and shone in my face and around the shore where I was. I happened to look behind me and saw an amazing, stunning and seemingly miraculous sight. Something I had never seen before and didn’t know was possible. Looking back at the nearly black rain filled clouds behind me I saw silhouetted against them the most brilliant, but impossible shaped rainbow. I have seen hundreds of rainbows in my life having spent so much time outdoors and New Zealand being a rainy country, but I had never seen anything like this. I didn’t know it was possible. 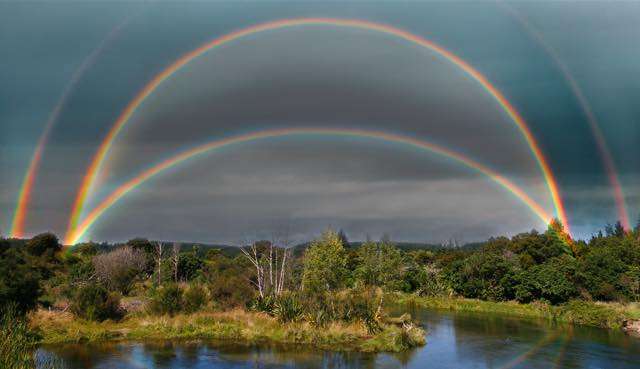 The arc of the rainbow was more than a half circle due to the very low angle of the sun. The rainbow was as bright as the brightest rainbow I had ever seen. It had the normal double rainbow further out from main one but what made it different was that it had a second rainbow within it of a different arc just as bright and powerfully impacting because of the black sky behind and the bright sunlight around me. It completely amazed me and after it was gone I wondered at it.

A few days later I asked my son Matt to make up a mock picture, using photoshop, of what I saw and I have included it below but although it is a good representation it is not as broad banded or as bright or as close as the actual rainbow I saw. The second rainbow with the different arc inside the main one was the extraordinary thing. I know the physics of rainbows and it seemed impossible that this could be real.

When I got home I emailed my brother, who is a scientist and brilliant at research and told him what I saw. He wrote back a few hours later. He said to me, “you have seen an extremely rare thing! It is so rare in fact that there have only been five reports of anyone seeing this type of rainbow in the last 250 years. In fact it has only been since 2011 that scientists have believed that such a rainbow can exist.” He then told me how it happens.

Evidently every shower of rain has identical sized raindrops, causing identical light refraction angles which make the phenomena of a uniform rainbow possible. There is only one refraction product possible from any single rain shower. But if you get two rain showers at two different altitudes overlapping each other with two different sized raindrops mixing, and sunlight hits them to create a rainbow at the same moment too, then this kind of rainbow is possible. Different sized raindrops have different refraction angles because the bigger ones flatten a bit more! It is called a ‘Twinned Rainbow’.

After I realised what an amazing thing it was that I saw I began to realise that this was the Lord talking to me. Rainbows always speak of the promises of God and I realised that any ordinary rainbow wouldn’t have gotten my attention. I have seen hundreds of them in amazing variation. But this one got my attention.

I realised that the Lord was saying to me, ‘ALL OF MY PROMISES TO YOU STILL STAND’.

So now I am encouraged to keep speaking as doors open to me but Denise and I are still seeking the new degree and direction of ministry, as far as travel goes, that the Lord would have us to walk. It will not be as busy as we have had in the past. However also we are now in our late sixties and early seventies so that is appropriate. Interestingly many who have heard me speak have said that there is a new level of authority and anointing there in my preaching. Even Denise says she sees this so I give it some recognition.
So blessings to you all and thank you for being a part of my journey in life, in God and in the ministry of the Word of God.

(I didn’t expect to use this page for personal stories but wanted to share this. The next posts will be more musings and revelations oriented.)